I ate breakfast at 7am at the Loj’s buffet and then headed out. I was booted up and on trail by 8am. I decided to wear my snowshoes for the entire hike today, though for the first few miles it definitely wasn’t necessary. I mainly didn’t take them off because I didn’t want to have to carry them (I need to figure out a better system for strapping them to my bag…). I passed by MacIntyre Falls as the trail slowly climbed. 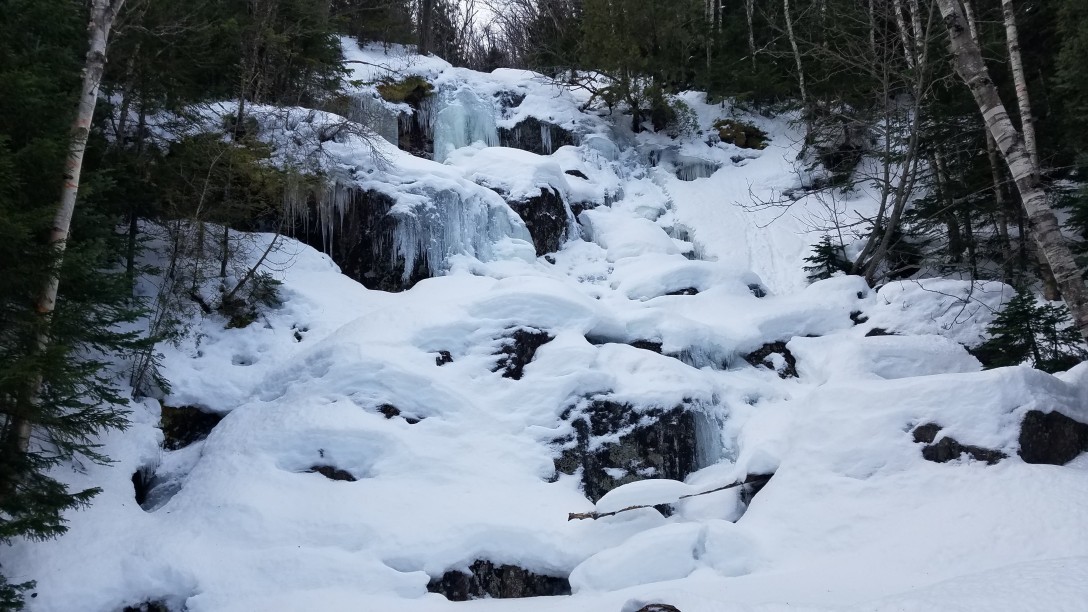 For my first peak of the day, I took the spur trail up to the summit of Wright (4557′). It was completely socked in and very windy, with billowing snow causing poor visibility. I had to navigate one cairn to the next, and sometimes had to go hunting for the next cairn because I couldn’t see it from the last. 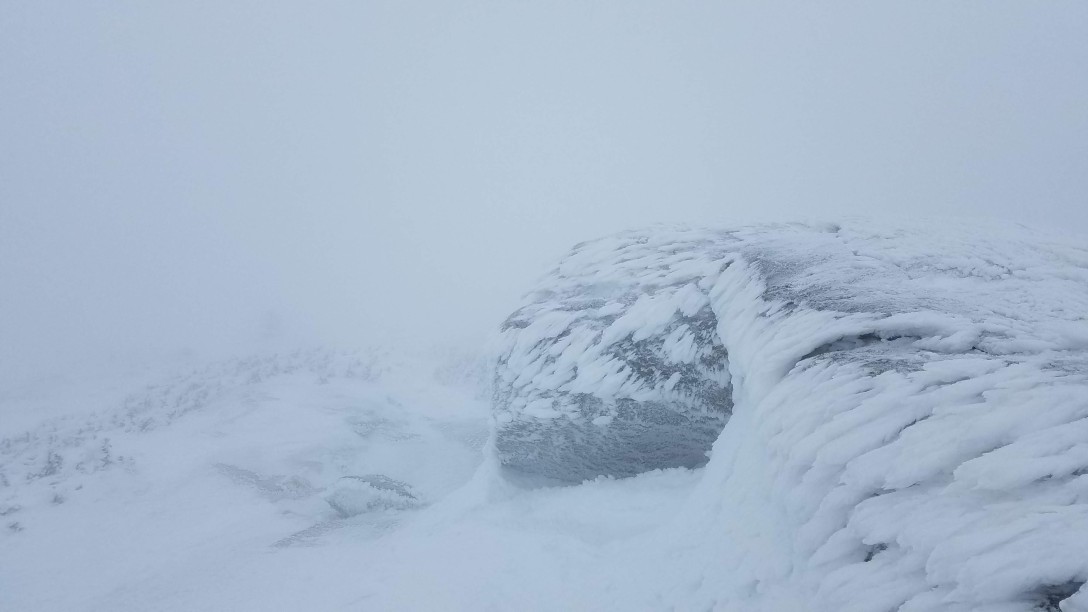 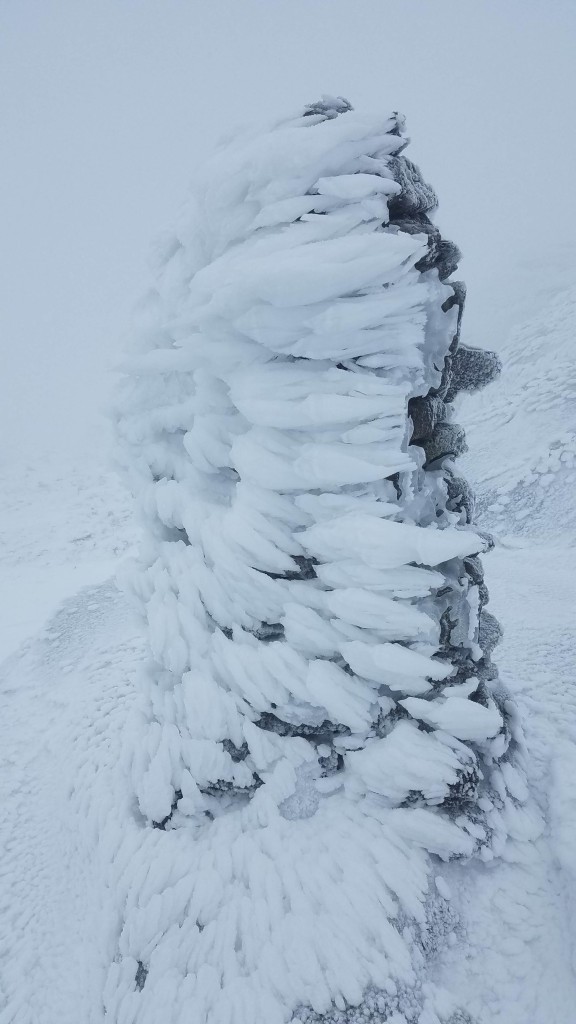 I passed by at least 8 people climbing up as I descended. Once I returned to the main trail, I took the left and headed uphill towards Algonquin (5102′). It was a long, steep climb to make the summit, with the last section completely above treeline, and with 3-4 feet of snow on the trail. It was somewhat packed down but had some powdery crumbly sections; I was glad of my snowshoes. The wind was also blowing by at 35 MPH, which made for a summit temperature of 14 degrees including the wind chill. 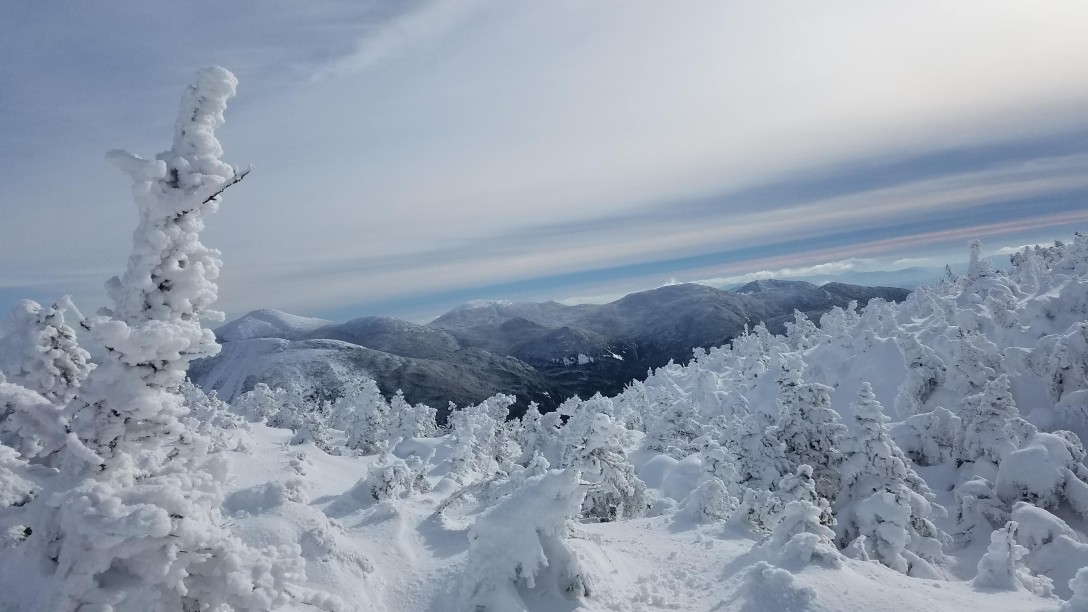 I took a few pictures and then quickly descended towards Boundary Peak (4826′) and Iroquois (4829′). This is where I questioned my life choices. I was tired and it was beastly cold, and there wasn’t a clear path to follow. 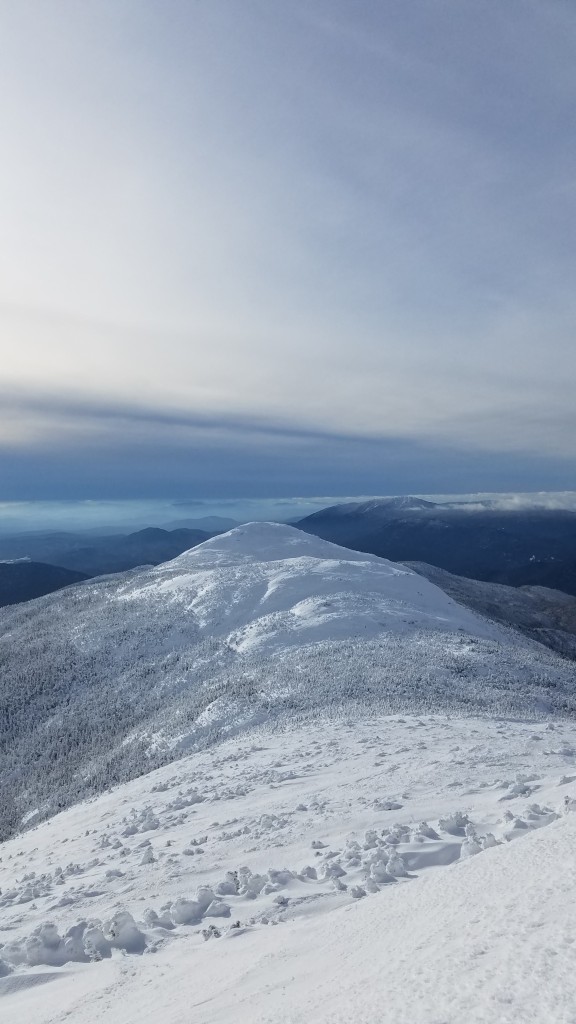 I worried that I had bitten off more than I could handle, and that perhaps the Adirondacks were rougher than I’d anticipated. In the col between Algonquin and Boundary, I met a man hiking with his dog. He had summited Boundary but decided against trekking over to Iroquois because his dog got stuck in snow along the way. After I summited Boundary and started the slight down before the climb up to Iroquois, I met a young man hiking back from the peak and we chatted for a few minutes. He just graduated from UVM and was out hiking and backpacking to celebrate. I was thankful to have another set of tracks to follow. I avoided a few spruce traps that he fell into, and found one of my own. I escaped without too much trouble and made it to the peak of Iroquois. I then turned around and went back the way I’d come.

On my way back to the lodge, I passed by another dozen or so hikers. I arrived back at the Loj parking lot by 2:45pm.