Skip to content
Trail Heads:
Brooks Rd., Middletown, CT – Parking: right by the Asylum Reservoir Number 2, there is off-street parking for 2 cars. The 2 times we’ve been here, parking was always available. The Blue trail (going in the southerly direction) is almost directly across the street from the parking spaces/reservoir. The Blue trail (coming from the northerly direction – i.e. Reservoir Rd) is down the road and is on your right-hand side before the road T’s with Bear Hill Rd on your left. The trail is a bit overgrown so you might have to search a bit. This is an excellent place to do a loop hike using the Blue-Yellow Reservoir Loop trail and the Blue trail.

Bear Hill Rd., Middletown, CT – Parking: there is off-street parking for 3-4 cars. The road is also very quiet and has a sizable shoulder so parking isn’t an issue at this trail head. This trail head was easy to find.
Length/Distance: Let’s see… from Brooks Rd, following the Blue trail, to Reservoir Rd was approximately 1.2 miles; from Reservoir Rd, following the Blue-Yellow trail, back to Brooks Rd was approximately 1.45 miles. My GPS tracking program said our route was 2.66 miles long. Another day, we came back to hike the section of the trail from Brooks Rd to Bear Hill Rd. Turns out, that route is only 0.24 miles long.
Summary: We walked down Brooks Rd and located the Blue trail on our right. After tromping through some bushes, we began our hike. 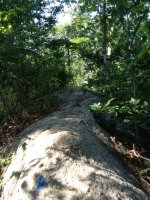 The beginning of the hike was beautiful. There were fantastic views of the reservoir and it was a gorgeous day. 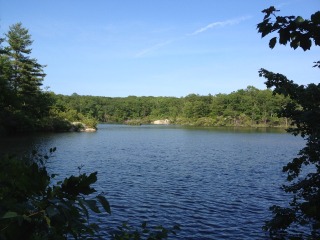 After walking for a bit more, we came to a clearing at the top of a ridge and found a gray and orange tent. Now, people aren’t allowed to camp out along most of these trails. However, if someone is camping and being responsible in their behavior, I simply would note it and keep going. However, as we continued to hike along a cliff edge, I looked down and noticed 10+ bags of garbage at the bottom of the cliff, clearly thrown off the ledge. After seeing this, I decided that we would notify someone after our hike.
We followed the trail down and around the cliff, gradually working our way back down. There was a pretty cool rock there.

Not long after, we found ourselves at Reservoir Rd where we found the Blue-Yellow trail and began following it. At the beginning of the trail within view of the road, we saw a moped. A bit further on the trail and we encountered a dirty, unkempt Caucasian male in his 50’s collecting firewood with a bottle of alcohol under one arm. He seemed rather unsteady on his feet and appeared to be arguing with himself. We drew the conclusion that this man was more than likely living in the tent and throwing the garbage off the cliff. From there, we followed the Blue-Yellow around the reservoir. It was very pretty.

There was so mud/muck to trudge through but it was fairly minimal. The trails were marked pretty well and there weren’t any side trails to contend with. We didn’t see any frogs; we did see chipmunks and squirrels. There also was some very cool milky quartz along the trail. 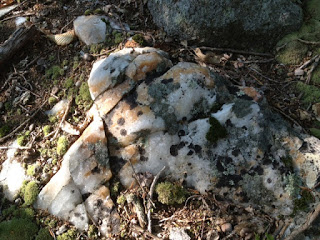 At the end of the hike, we did contact the Middletown police’s non-emergency number, which was posted by the trail map at the trail head. They sent someone out to talk to us but the police officer seemed rather taken aback by the prospect that he might have to walk to find this person. Give the officer’s hesitance, I decided to also contact the Connecticut Forest and Park Association to inform them of the situation. Hopefully, everything got sorted out in the end.

We completed the small portion of Blue trail from Brooks Rd to Bear Hill Rd another day and there was nothing of note located along that portion of trail.