Trail Heads:
Aircraft Rd., Middletown, CT – Parking: To reach this trail head, you’ll need to drive past a section of the Cockaponset State Forest. If you came off of Rt 9 and travel towards Pratt and Whitney, the trail head is on your right. The majority of parking here is on the side of the road. Aircraft Rd does have a sizable breakdown lane but cars travel on this road around 50-60 MPH so be very careful if you do park on the road. I found a 1 car space off the road a few hundred feet away from the trail head.

Length/Distance: According to my GPS tracking program, our route was about 3.6 miles. According to the CT Walk books, it was only supposed to be 3.1 miles.

Maybe 1/2 mile into the hike, there’s a spot on the trail where you have to climb down 3-4 feet. My dog almost hurt himself jumping down; if I’d had my way, I would have picked him up and lowered him down. You need to be somewhat agile to navigate this section without getting hurt. 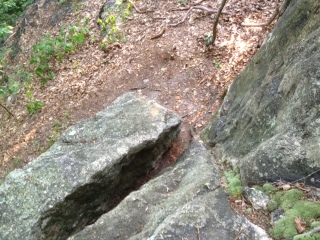 Right after this, there was a very steep section of trail with flat, smooth rock covered with dirt and tiny slippery pebbles. I saw it, reminded myself to be careful, took a step, and fell. I slid down a few feet and my leg got pretty scratched and bruised. My palm wasn’t too happy either. So, please take note: be careful. 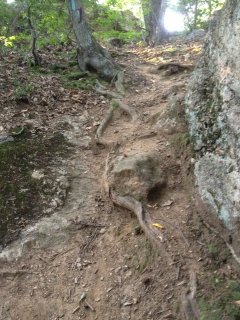 After this, we saw a huge boulder that climbers clearly use for bouldering. They’d left chalk marks on some of the biggest handholds.

A bit up the trail from that there was a cave/rock overhang. There was a lot of spiderwebs hanging from the rock.

Soon after that, the trail opened up under high voltage power lines. There, we found a lot of fascinating plants! First, there was a cute Charlie Brown Christmas tree.

Then we found wild blackberry plants with ripe fruit on them! 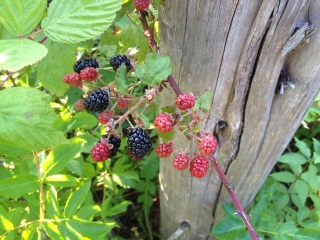 We had some of them and they were very good.

We also found some wild blueberry plants with ripe fruit.

We tried some of those as well. They were much sweeter than store-bought ones, though a bit smaller.

There was some beautiful flowers (which we also saw on our first hike of the Mattabesett). I found they are called Wandlike Bush-clover (Lespedeza intermedia). Also, a fantastic resource for identifying local CT flowers can be seen here; they offer pictures and you can look at flowers by their color. Extremely useful!

There was an odd looking plant that stood about 5 feet tall. Turns out it’s Verbascum Thapsus. Apparently, in the western US they call it Cowboy Toilet Paper. I’m not sure how keen I’d be to try that.

We encountered a plant with berries that we initially couldn’t identify nor could we figure it out after scouring the internet for over an hour. I finally found the CT Botanical Society’s website and sent them an email with the below picture. They identified it as either Wild Sarsaparilla (Aralia nudicaulis) or Bristly Sarsaparilla (Aralia Hispida). Both of these plants have edible berries. 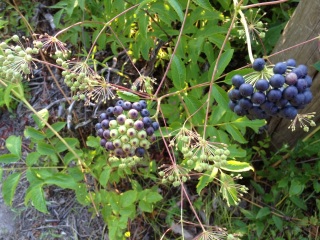 We also saw some Staghorn Sumac (Rhus typhina) which is not poisonous. The major differences between Staghorn Sumac (SS) and Poison Sumac (PS) (Rhus vernix) are: 1) PS’s leaves have smooth edges and are more oval shaped while SS has jagged edges and long frond-like leaves; 2) PS’s stalks are smooth while SS has brown/red hairy bristles; 3) PS only grows in swampy wetlands while SS grows in dry, poor quality soil; 4) PS grows only white berries when ripe while SS grows only red berries when ripe.

Along this section of trail under the power lines, we had to climb down a huge set of boulders. There were a lot of holes and drop offs so we were very careful. My dog could handle it but just barely. 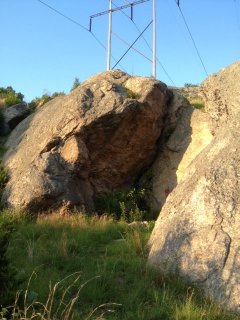 After this, the trail led back into the woods again. We quickly came to a creek that parallels Saybrook Rd. The water was cool and there were many waterfalls. It was very pretty; it made me want to return on another day to splash in the water. There were sections that were probably 3 feet deep. 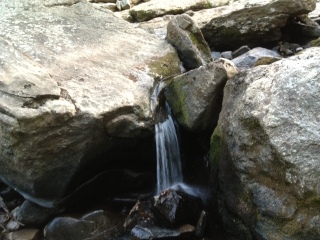 Right around the creek we found 1/2 of an Eastern Bluebird egg shell. It was super cute. 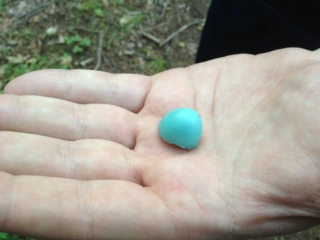 This is the first time we’ve made it out of Middletown on the Mattabesett trail!!! 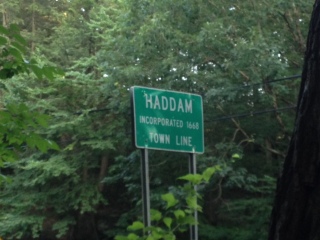 From here, we easily found the Blue-Yellow trail and followed it back towards Aircraft Rd. We crossed under the power lines again and had a beautiful view. 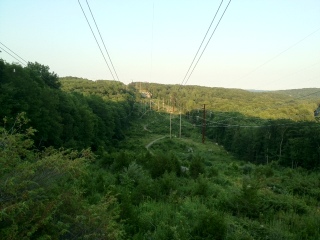 Right after entering the woods again, we found another 1/2 of an Eastern Bluebird shell.

The rest of the hike was fairly quick and easy. The Seven Falls Loop trail was easier than the main trail. One cool thing we did see was a whole section of the forest covered in Evergreen Woodferns.

Overall, it was an eventful hike with lots of cool stuff to see! It did convince us that we needed to get in the habit of carrying a small first aid kit with us after my leg was scraped up from my fall and my friend was stung by a wasp on the way back to the car. Ah, fun times!