Trail heads:
625 Country Club Rd., Middletown, CT – Parking: There is an area to park 2-4 cars off of Country Club Road, though it’s like a short paved driveway so to fit 4 cars, you’d be blocking cars from leaving. Look for this sign; it’s right by the parking area. We hiked from here.

135 Footit Dr., Middletown, CT – Parking: Footit Dr is a dead end that quickly turns into a dirt road. There are multiple parking areas on this road; look for the first one on the left that has a Red-Blue blaze. Based on the trash (condom wrappers, used condoms, and small plastic baggies), it’s a popular trysting and drugging spot.

Length/Distance: In 2009, this portion of the Mattabesett trail was changed; a landowner who had previously allowed the trail to cross their land withdrew their permission and the trail had to be rerouted. While the New England Trail interactive map was very helpful in regards to parking places and trail directions, it did not provide specific distances for the portions of trail we were completing. According to my GPS tracking program, our route was 3.34 miles.

Summary: The first stretch of the hike was on-road. We headed out to the left of the parking area on Country Club Road, towards I-91. The markings took us over I-91 and past the Department of Public Safety.

There were cloth or paper arrows with letters inside the arrow (I think it was NETNST) pretty often; wherever there wasn’t a blue blaze, there was an arrow. After passing by Public Safety, the trail turned right onto Bell Street.

Right before Saw Mill Road, the trail turned left into the woods by a large metal gate. 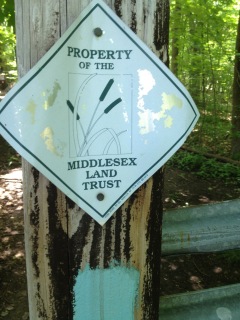 This area of the trail was very beautiful; it looked out onto Highland Pond. I’ve lived in Middletown area for over 5 years, biked the roads around this property, and never knew this preserve was here. 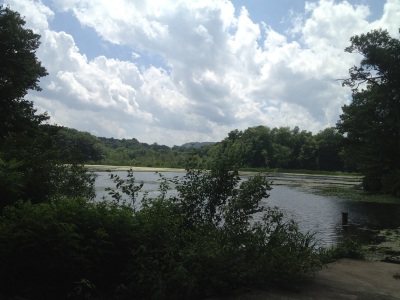 There was a section of the trail here that needed some trimming.

We saw a swan out swimming. 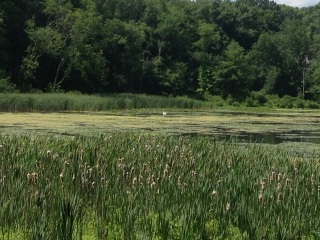 There was a quaint bridge over part of the pond.

It offered a perfect view of the pond.

We saw a Great Blue Heron (Ardea herodias) wading in the shallows but he flew away before we could get a good picture. We also heard many American Bullfrogs (Rana [Lithobates] catesbeiana) in the marshy area near the pond. 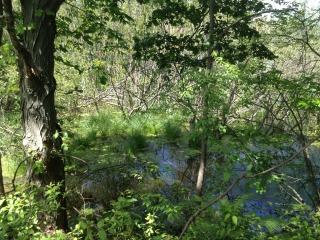 We also found some Black Raspberries (Rubus occidentalis) near the marsh. 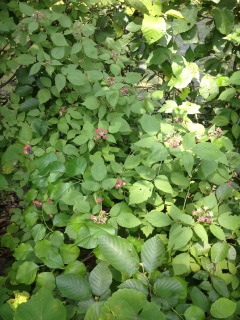 The trail emerged onto Atkins Street. By the entrance to the preserve, there was some nice signage and actual paper trail maps. 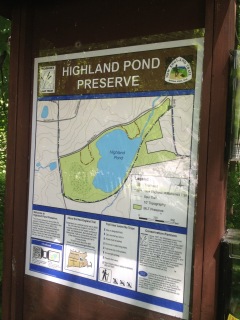 We hiked up Atkins Street’s hill and followed the Blue trail when it turned left into the forest. 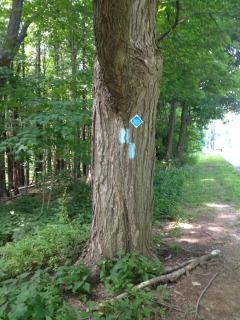 This section of the trail was in a pine forest!

The ground was moist and there were large muddy sections. Some areas had bridges, others didn’t. 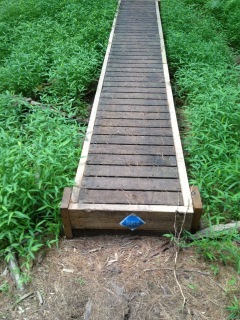 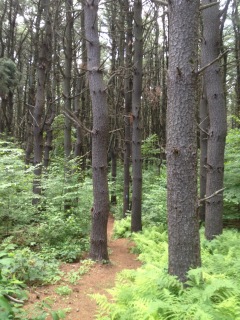 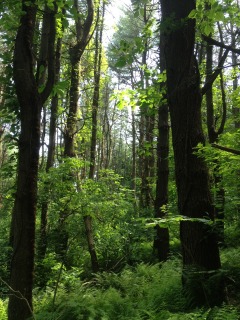 There was an old foundation of some kind alongside the trail.

The incline concluded after we found the Red-Blue junction.

The Red-Blue trail ended back by Footit Drive.

One thought on “Mattabesett Trail – Part 16”