20 Spruce Brook Rd., Berlin, CT – Parking: This is not technically a parking area. However, the Mattabesett trail emerges onto Spruce Brook 0.7 miles away from the intersection with Rt-5/15 so we parked in the lot of Turnpike Wine & Spirits.

Length/Distance: In 2009, this portion of the Mattabesett trail was changed; a landowner who had previously allowed the trail to cross their land withdrew their permission and the trail had to be rerouted. While the New England Trail interactive map was very helpful in regards to parking places and trail directions, it did not provide specific distances for the portions of trail we were completing. According to my GPS tracking program, our route was 6.74 miles, though approximately 0.6 miles of that was from retracing our steps.

Summary: We started from Dr Francis Giuffrida Park. We followed what we thought were Blue trail markings to the left, towards this gate.

There was a lot of plants growing on the side of the path here, including slightly wilted chicory (Cichorium intybus).

The path paralleled the power lines for a bit and had some wild growth underneath them. 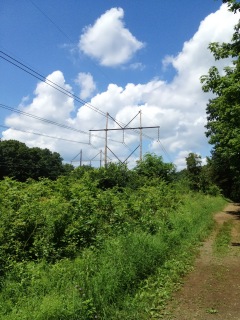 Soon after this, we realized that we had not seen any blue blazes. We retraced our steps back to the gate, thinking we had somehow missed a turn in the trail. On our back trail, right next to the gate, we found blue blazes, indicating the blue trail traveled the way we’d gone. 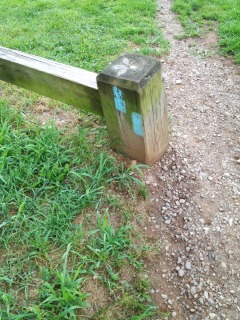 So we turned around and hiked towards the power lines again. A bit after the power lines, the path we were on intersected with the real Blue trail. We followed the trail back a bit to see where it had come from. It turns out, the blue trail turned right at the park sign and went along the lakeside (straight ahead in the picture). 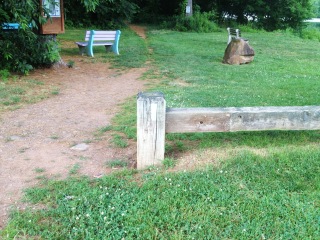 After that quick side trail, we returned to hiking the blue trail as planned. There was some very nice Black-eyed Susans (Rudbeckia hirta).

A bit down the trail, the blue blazes go to the right when the main path continues straight. 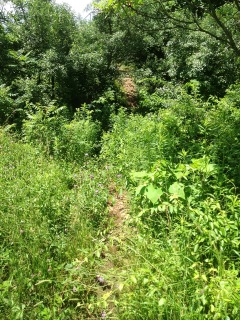 The next section of trail began the assent to Lamentation Mountain. The trail was very rocky and uneven.

There was a nice sign indicating that was indeed the direction we were going. 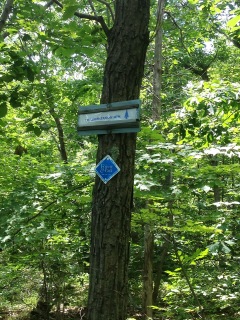 At the beginning of the hike, we were unsure how many miles the hike would be. It was also in the mid-90’s with a heat index around 100 degrees so we brought three water bottles each, along with lunch supplies. This translated to quite a bit of weight and between that and the heat, we found the assent to the summit more of a struggle than we had initially anticipated. However, the view was beautiful.

We also saw a 3+ feet snake skin along the cliff side.

There were some unripe Lowbush Blueberries (Vaccinium angustifolium) at the summit. 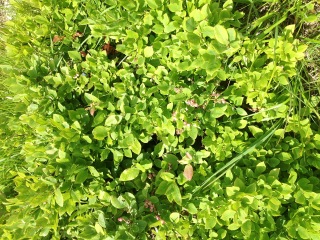 As well as some Staghorn Sumac (Rhus typhina) 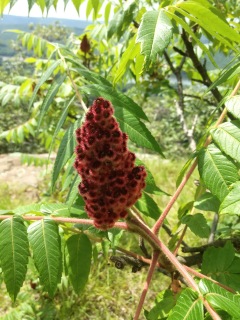 The view was very nice though the cloudless sky made the sun very hot.

After only one or two look out points, the trail turned into the forest and off down the ridge. A sign informed us we were headed in the right direction, though it didn’t specify distance (which would have been nice).

We saw mystery pods along the trail. We initially thought they might be green beans but found that the pods contained a light, white feathery substance not unlike a dandelion puff.

Near here, the trail goes by a hillside meadow.

The trail continued downhill for quite a while. After a bit, the trail flattened out and got really mucky.

This particular section had been flooded for long enough that it contained a very large frog population of typical Northern Green Frogs (Rana [Lithobates] clamitans melanota). And this particular group of frogs squeaked when frightened. We decided to record it because it sounded so strange!

They were mostly small and cute, though we did hear an American Bullfrog (Rana [Lithobates] catesbeiana). 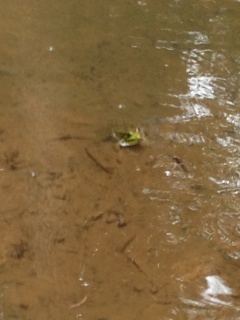 We continued down the trail. The bugs were horrid the entire hike and seemed especially prominant around here, given the stagnant water. We passed by some random car halves. 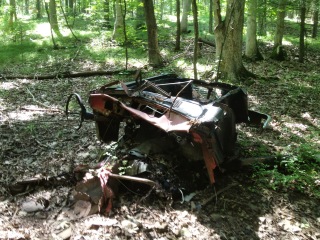 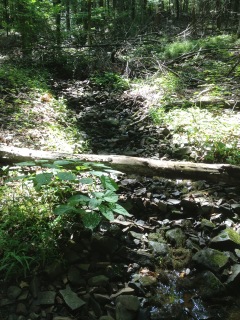 While this in no way looks like a trail, apparently it is.

We continued straight and “trail” exited onto Lamentation Drive. 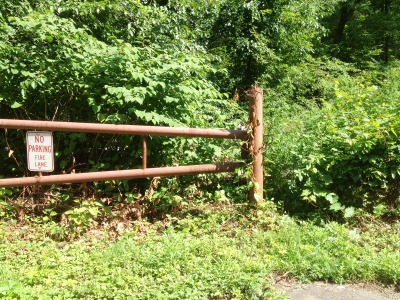 In all honesty, if it wasn’t for the blue marks on the telephone pole, I wouldn’t believe that was the trail.

This area really, really, really needs to be re-blazed. It’s a tick and pricker infested morass. We sat on the curb and ate lunch in the shade. The road was very quiet. We then continued down the road and had to walk back and forth a few times to realize that this marker (which was a bit hard to see) meant we needed to jump the barrier.

And go into the woods.

There was another abandoned car there. 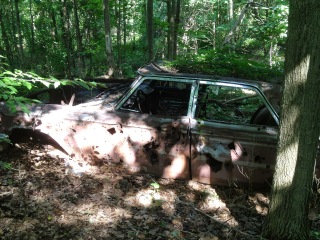 The trail then lead through an area with shoulder high bushes; the trail had maybe knee high grass.

From there, it wasn’t long until the trail emerged onto Spruce Brook Road.

There is a parking area here for maybe 2-3 cars right next to someone’s driveway. We then did a road walk down Spruce Brook. It took us past the Old Yard Cemetery.

Some of the local residences had nice flowers out front.

Approximately 7/10ths of a mile after the trail merged with Spruce Brook, we finished the Mattabesett Trail at Routes 5 and 15! 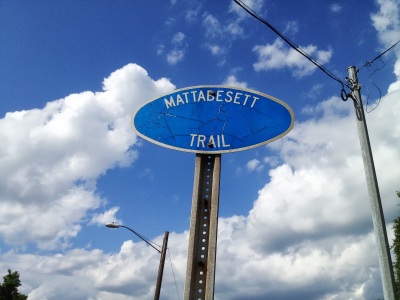