Trail Head:
Mt Carmel Ave & Outer Ridge Rd, Hamden, CT – Parking: There is a parking lot on Mt Carmel Ave with room for maybe 3 cars to park off the road. The entrance to Circle trail is accessible either from the road or from a connector trail from the parking lot. We were originally going to start the hike from Triangle trail by Hogan Rd but there is absolutely no parking. We left one car here and did one large loop.

Length/Distance:
We completed a loop hike, taking the Circle trail through to Tuttle Ave then Triangle trail back which was slated to be around 3-4 miles. According to my GPS tracking program, our route was 3.77 miles, not including the half-mile walk back to the Circle trail parking lot.

Summary: We started the hike up the connector trail from the parking lot. The connector trail wasn’t marked at all but follow it to the left and it connects with Circle trail. There was quite a bit of flora by the trail. We saw Narrow-Leaf Mountain Mint (or Slender Mountain Mint) (Pycnanthemum tenuifolium). Apparently, the dried leaves can be used as a flavorant in tea or cooking. It can be used as an insect repellent, though its cousin is better.

Circle trail wound around the giant’s right leg and knee and left leg.

There had been a fair amount of rain lately and there was water running in creek beds that didn’t typically have water. 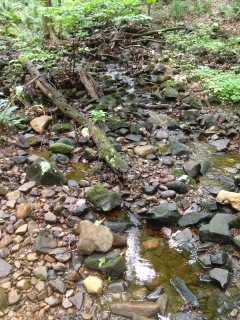 We also happened upon a camp site. Now, normally camping is not allowed on Sleeping Giant but if a non-profit organization or kids’ camp wants to camp, they can get a permit. We did not know this so we called the DEEP and told them about the abandoned camp. They came out, took at look at it, contacted the owner of an abandoned trailer with camping supplies on it, and found out they were camping there legally as part of a non-profit kids’ camp. The DEEP officer was kind enough to call us and let us know. 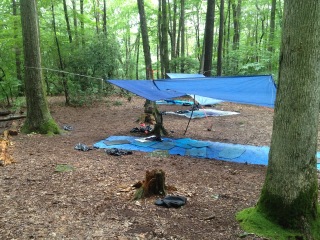 The site was quite a mess though. We think they abandoned camp part way through their stay due to the rain.

Right around here, there was the Gorge Cascade. It’s a lot further down than it looks. 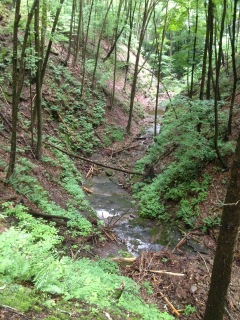 We hit the bottom of the Circle trail and connected through to the Triangle trail via the horseback riding trail (U). The Triangle trail was a never-ending uphill climb up and over the giant’s hips.

There were some Intermediate Woodfern (Dryopteris intermedia) along the trail.

Between the Orange and the White trails, there was a large tree down on Triangle trail.

Towards the end of this hike, there was a nice wood bridge over a creek bed.

From there, the trail exited onto the side of Mt Carmel Ave. We trekked back to our car at the base of the Circle trail.