620 Edgewood Rd, Berlin, CT – Parking: On the side of Edgewood Road, there is parking for around half a dozen cars to park off-road.

Summary: The road walk on August 6 was uneventful. We began our backtrack hike on August 11 from Edgewood Rd. 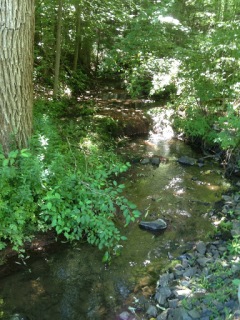 We went past the gate and up the wide trail.

There were many bees feasting on wildflowers like purple and white Chicory (Cichorium intybus) and Larger Bur-marigold (Bidens laevis).

Across the trail, there was a gigantic spider, carrying a snack sack along with it. Unfortunately, the camera couldn’t focus on it properly.

Initially, we missed this turn off of the trail. The main path continued on and the tree was a bit off the path. 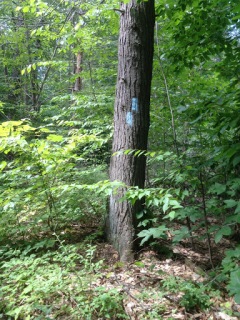 This portion of trail was entirely uphill. There were sections of loose rock to scrabble over.

The trail went over the pipeline area and it was quite overgrown. The trail looked like a tick convention (path is dead center of the picture).

Looking back, it might be difficult to find the trail. You can see the trail marker on the tree in the shadows. 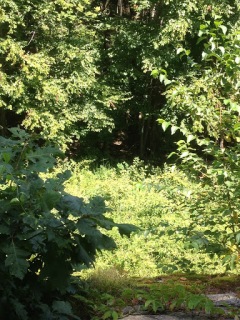 There was a tiny little stream along the way.

After a bit of climbing, we found the spot where the trail split. The trail was marked but indicated the turn much too early. A tree on the left indicated a turn to the right as the path curved around. I recall thinking whoever marked the trail was a bit overzealous as it was obvious the main path turned. But it so happens that the trail goes straight ahead from the turn marker, while the main path turns to the left.

And in all fairness, it wasn’t much of a path. It was much more “blue trail” though.

During the August 11 hike, we did see two different Eastern Ratsnakes along the trail sunning themselves; they moved out of our way as we hiked through. Overall, both hikes occurred on beautiful days. It was a relief to finish the August 11 hike so we can begin to hike forward without having to deal with Hubbard park’s time table.