Vermont Appalachian Trail section hike
By “Timex”
Friday, November 8th:
VT-9, Woodford, VT to Story Spring Shelter
19.0 total miles for the day – rough map completed after the fact
Mountains climbed: Porcupine Lookout (2815 ft), Little Pond Mountain (3100 ft), Glastenbury Lookout (2920 ft), Glastenbury Mountain (3748 ft)
Summary: I parked my car by the Bennington Town Offices after obtaining a parking permit from the town manager’s office. I then was able to hitch a ride three miles up VT-9 to the trail head. I started the hike from the USFS parking lot on VT-9 (Molly Stark Trail) at 8:00am. It was lightly snowing when I started my hike. As I climbed, it began snowing in earnest. The view from the first lookout showed just how much ice and snow had accumulated on the trees. I passed a day hiker around here.
By the time I reached Goddard Shelter halfway through my day’s hike, the snow had accumulated 2-3 inches and visibility was very poor. Right after I left the shelter, I almost ran into the rear end of a huge moose. It trotted up the trail, leaving gigantic footprints in the snow. I hiked through the snow for quite a while and reached Story Spring Shelter at 4:50pm. I quickly make dinner and bedded down for the night; including the windchill factor, it got down to approximately 15 degrees that night. I slept from 6:30pm until 6:15am. 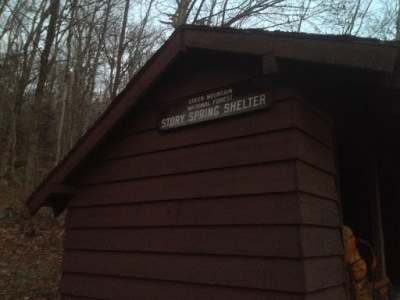 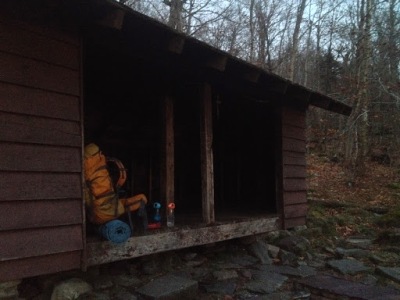 Saturday, November 9th:
Story Spring Shelter to VT-11/30
21.1 total miles for the day – rough map completed after the fact
Mountains climbed: Stratton Mountain (3936 ft)
Summary: I got up around 6:15am, stuck my feet into icy, frozen boots, and hit the trail by 7am. It took about an hour of hiking before I could feel my feet again. I realized quickly that I’d made a mistake in not putting my water filter inside my sleeping bag; it was frozen and wouldn’t filter water. It took about two hours of being in direct contact with my skin before it began to function again. After climbing for two hours, I reached the top of Stratton. At the top of Stratton Mountain, there was a fire tower (and a TON of wind). 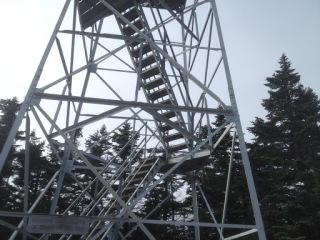 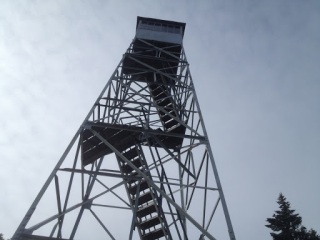 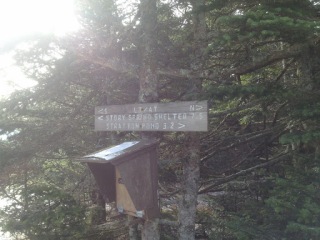 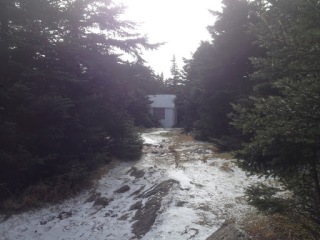 While you can climb the tower, the top platform was not open. The view from the stairs was pretty impressive though.
On the way down the mountain, I encountered two day hikers; I also pass by two section hikers on the logging road. From Stratton onward, it was mostly downhill. I was able to make very good time and passed by Spruce Peak Shelter’s side trail around 2:45pm and arrived at VT-11/30 at 4pm. 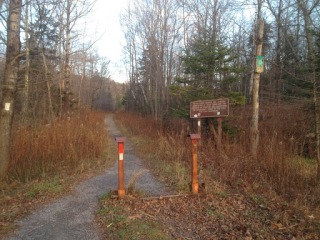 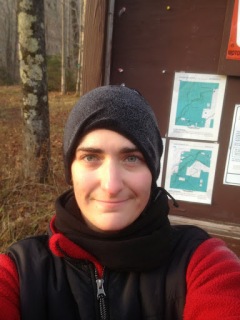 I was able to hitch a ride after about 15 minutes. I was very lucky to be picked up by an older gentleman who was heading to Bennington anyway (~30 miles). He stopped at McDonald’s, bought me a coffee, and refused to take any money I offered him. I arrived at my car by 5pm and headed home! Given the weather report I saw today, it was a good choice to shorten my hike. It looked like that section of Vermont will be getting more snow and rain today and tomorrow.