Short St & Hard St, New Haven, CT – This is an official trail head for West Rock Ridge State Park, with access to the Blue/Yellow Westville Feeder Trail as well as Teal and Teal/White trails. The parking lot has space for parking for at least 8 cars and is open sunrise to sunset. There is additional parking available at 1 Valley St that has access to the playground area via a foot bridge.

507 West Shepard Ave, Hamden, CT – This is the closest parking available to the beginning of the Regicides Trail. It’s a dead end road and there’s side of the road parking for 3-4 cars.

Length/Distance: According the DEEP’s trail map, the entire trail was 7.04 miles. According to my GPS tracking program, our route was 8.69 miles, which included 0.3mi from the car to the trail, 0.3mi of backtracking from the northern terminus, and 0.6mi along the Blue/Yellow feeder trail as off-trail mileage.

Summary: Originally, we’d planned to park one car at the southern terminus of the Blue trail which was within the park. However, the park closed to car traffic after the last weekend in October. Instead, we parked one car at the Westville Feeder trail and then headed to West Shepard Ave. The day was a bit brisk (~high 30’s) and windy.

We began hiking by stepping over the low metal barrier and continuing up West Shepard Ave.

This area felt very strange. We were greeted by a carved head hanging from a tree.

There was electric lines going back along the road as well as street lights (which were on in the middle of the day). After maybe 2/10ths of a mile along the blocked off road, the road went by an old abandon house and barn. 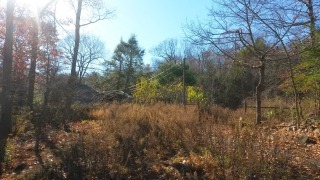 We continued along the road until it ended at a pile of rocks, with some spray painted rock formations. We could see the blue trail blazes from there. 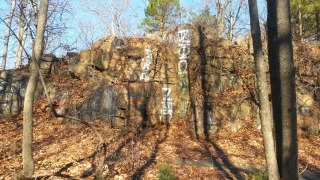 From there, we headed to the right along the trail, to walk back to the northern terminus of the Regicides, at the intersection with the Quinnipiac.

There was some snow at the trail intersection. 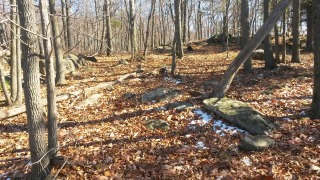 Near the intersection, there was a good view.

From here, we continued back the way we had come, passing by the end of West Shepard, and hiked south. We passed by a view of Farm Brook Pond.

There was also a good view of New Haven.

We then had some good view of Lake Watrous.

We passed by a little stone shed with no roof.

We had some views of Lake Dawson.

Eventually, we crossed over the Rt 15 tunnel.

And went by the tunnel’s ventilation shaft and emergency exit which was much larger than pictures had led me to believe.

We passed by Judges Cave which was really more like gaps between rocks than a cave.

After a walk that skirted along the edge of the cliff, the trail finished behind the pavilion.

There was some beautiful views from the parking area. 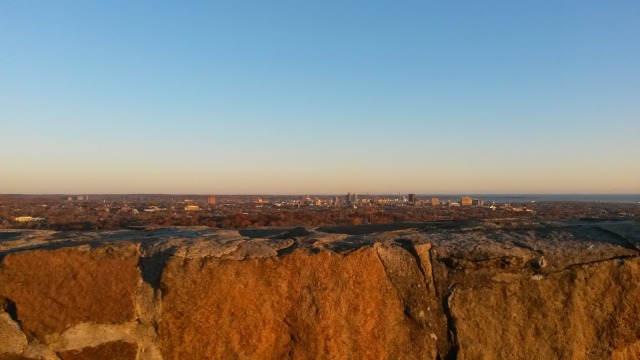 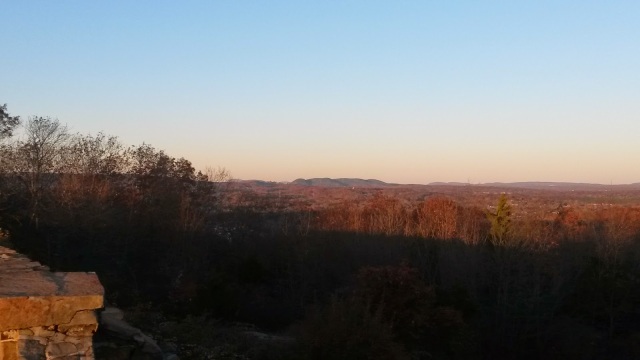 From here, we headed back along the Blue trail to the Blue/Yellow Westville Feeder Trail. 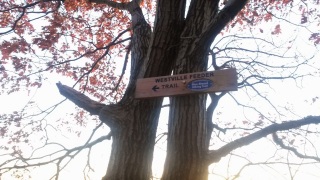 After a bit of slipping and sliding down the trail, we arrived at the park entrance where we had parked one car.