I arrived at the trail head by 6:30pm. I quickly assembled my backpack and headed out by 6:45pm; unfortunately, there was no way to tell (and I hadn’t thought to figure out beforehand) which way was north or south on the trail. I ended up going the wrong way until I was going to reenter the woods and saw a sign saying it was the M-M north. I turned around, hiked past my car around 7pm, and hoofed it up the road walk. The sun went down a bit before 8pm. It got dark fairly quickly, reaching the point where I needed a headlamp by 8:15pm. As it turns out, I hadn’t checked the batteries on my headlamp and I hadn’t used that particular one in a while. So my headlamp went out within a few minutes. For a while, I struggled on in the dark. Then I used my phone’s flashlight function to see. There’s nothing quite like necessity to encourage invention – I figured out that if I flip my ball cap backward, I could slide my phone through the adjustable strap and use it almost like a headlamp, though it didn’t help cool me down to have a phone strapped to my forehead. I arrived at the shelter around 8:30pm, to find another person was sharing the shelter with me. I got water, set up my bedroll, made dinner, chatted with her, and then settled into bed around 10pm, having finally stopped dripping sweat everywhere. The mosquitoes were extremely active, even after sundown. The temperature got down to maybe 78 degrees; I slept fitfully on top of my sleeping bag.

I woke up very early, at 5:30am, as I’d slept poorly and was eager to start hiking. After packing up, I went down the trail a few minutes to get to Ruggle’s Pond. The park’s signage said they had a comfort station, which amounted to four pit potties and no running water. I used their toilets and filtered water from the pond near the swimming area. I didn’t see non-stagnant water by the trail until ~10 miles later and I ran out of water by the time I finished my hike. I headed out from the park at 6:30am. I hiked until 12 noon, when I arrived at the library 30 seconds before the taxi I’d arranged arrived to shuttle me back to my car. The day’s hike didn’t have any good views; it was full of forest road and trail walking and me swearing as the trail blazing left a LOT to be desired.

I had numerous issues with poor blazing. I had issues nearby Lake Wyola State Park, right before the Lakeview Road walk portion. A local summer camp, Pine Brook, uses white blazes on their trails as well. And at a portion of the trail where there were no more M-M white blazes in view, there were camp white blazes, directing me into the woods. I followed and double backed and tromped around for around half an hour, becoming increasingly frantic as I could not find where the trail continued. Eventually, I went back to the main path were I’d turned originally. There were no blazes to direct me forward. At the recommendation of a local out for a walk, I headed down the path towards the road, with the hope that I’d encounter the trail somewhere on the road. I walked down the path and through a field towards the road; at the road, on the state park’s sign, were white blazes. There were no blazes between the sign and a while down the path, with many side trails in between including those with white blazes from the local camp.

Also, once I hit N Macedonia Rd (an old woods road), there were very intermittent white blazes, enough that I began to worry I’d missed the trail turning. At that point, I happened to have cell service for the first time in a long while and managed to pull up the NET website’s trail map, confirming that I stayed on the woods road for a long while.

I became the most frustrated towards the end of my hike, on Cooleyville Rd, near the intersection with New Boston Rd. The last white blaze that I found was on a tree at an angle that was mainly visible from the woods. There was what appeared to be a trail, though it was close to someone’s property. There were markings indicating a state forest or park boundary. I tried going down the trail until it ended in the woods, clearly with no trail to follow. After walking back and forth for at 15 minutes, I finally decided that I was tired, hot, and didn’t care anymore and walked up the road towards my final destination, content to say “forget it” to this portion of the M-M. And of course, a bit after I passed by the intersection with New Boston Rd, I found another white blaze. After this incident, I ignored all white blazes and simply continued up the road. The last two miles of this hike (all road walking) nearly did me in; it was extremely steep, all uphill, and often in the direct sun. I could barely lift my feet to keep walking.

This hike drove home to me that the M-M trail is not meant to be traveled by following the blazes, and in that light, is not really something that inexperienced or casual day hikers are meant to hike. I’m used to the AT, where you are almost always able to follow from one blaze to the next, and if you can’t, it’s a good bet that you should just follow the trail with the most foot traffic. In general, the opposite is true of the M-M; if it’s well traveled, it’s probably not the M-M trail that you’re on. If you’re not bushwhacking, it’s probably not the M-M. It is immensely stressful and frustrating to try to hike a trail where it’s a chore to stay on the trail in the first place; I just wanted to go for a relaxing walk in the woods. And given that the M-M isn’t intended as a backpacking trail but as a day hiking trail, it should be even easier to follow than the AT.

There were heat advisories out for both Thursday and Friday. On Thursday, I sweat enough to make my shoes swampy and squelchy. When I took my shirt and shorts off at the shelter and hung them up, they dripped sweat for at least half an hour. My shoes still haven’t fully dried out and it’s been a few, albeit humid, days. The mosquitoes were enthusiastic from the beginning to the very end of my hike. This wasn’t a great trail experience in pretty much every way possible. 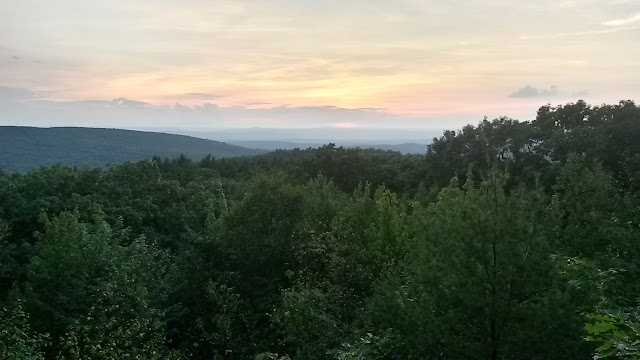 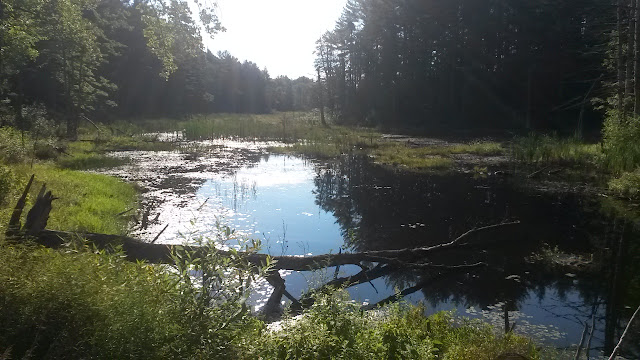