Skip to content
Sunday, March 26th, 2017
4000 footers climbed: Tom, Field, Willey
I arrived at the Highland Center at Crawford Notch around 9:45pm on Saturday night. I lucked out and the person I was supposed to share a room with never arrived. I woke up at 5:30am, got up around 6am, and was waiting for the breakfast buffet to open at 6:30am. I ate and then headed out to the trail, starting by 7:15am.

The Highland Center had 24′ of snow at their stake, with 7′ dropped in the past 48 hours. After asking around, I decided to forgo snowshoes. The ones I had were more sturdy than lightweight, and I didn’t really have anywhere good to put them when I wasn’t wearing them. I put on my Hillsound Trail Crampons in the parking lot and didn’t take them off until I returned from the hike. Since this hike is relatively popular, many people in snowshoes had gone through and packed down the trail, making it possible to leave behind the snowshoes. The weather was perfect for hiking – calm and sunny; it was 12 degrees when I started and 38 degrees by the time I finished my hike.

I headed across the railroad tracks and up Avalon Trail. After 1.3 miles, I went straight to connect to the A-Z Trail. I hiked on that for 1 mile, until the junction with Willey Range Trail and the Mt Tom spur trail. I headed up Mt Tom (4,051′) and had limited views from the summit due to the trees at the peak. I went back down to the trail junction and then continued up Willey Range Trail. Within 0.9 miles, I came to the summit of Mt Field (4,340′). The snow was fairly deep (step off the packed path and I’d be in snow up to my mid thigh) and at the top of Mt Field, the snow was starting to be less firmly packed.
As I stood at the top and tried to determine which direction the trail went (most blazes that are normally visible were hidden under snow), two folks from Plymouth, NH out on a day hike came by. They said they’d heard from someone on trail that the snow between Mt Field and Mt Willey was soft and unbroken. They figured they’d try and see how it worked out. They strapped on their snowshoes and headed off down the trail, and I followed behind them. I was glad for their snowshoes. The trail had been broken but it wasn’t really packed down from the past 7′ inches of snow, so it was soft and deep in a lot of places. Even following behind the snowshoes, it was a challenge in places.

After 1.4 miles of struggle, I made it to the top of Mt Willey (4,285′). I chatted with the Plymouth day hikers for a bit and then they headed back the way we’d come. I took a few pictures and then decided to have a snack before heading back. As soon as I brought out a bag of trail mix, two birds appeared out of nowhere, looking for me to share. I held out trail mix in my hand and they readily flew to my palm to eat my offering. 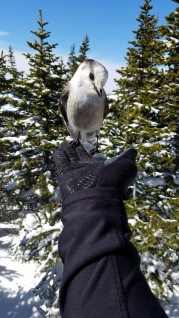 They would have done it all day if I’d been willing. I fed them for a while and then packed up and headed back down the Willey Range Trail. I went to the summit of Mt Field again, but headed down Avalon Trail instead, meeting up with the A-Z/Avalon Trail I hiked in on, via a small side trip to Mt Avalon (3,342′). 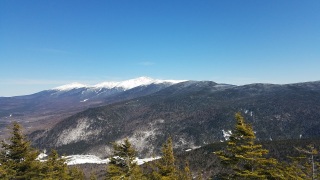 I arrived back at the parking lot by around 1:15pm. I went into the Highland Center for some food and drink, and to change into dry clothes before driving back to Massachusetts.