After an overly warm night trying to sleep, with the Irish group drinking loudly outside our window until 11pm, I was awakened at 6am by someone either vacuuming or leaf blowing the patio right next to our window. I tried to sleep again, but couldn’t manage it between the heat and the noise. I woke Toby up at 6:30am and we packed up. We had breakfast around 7am and had a slow start to the day, getting on trail by 8am.

We started the day with a 45 minute flat walk to Chalet du Glacier (1583m/5192′), which was surprisingly open when we arrived. The bathrooms were technically for customers only, but we used them in the morning rush they had with a handful of tenters. 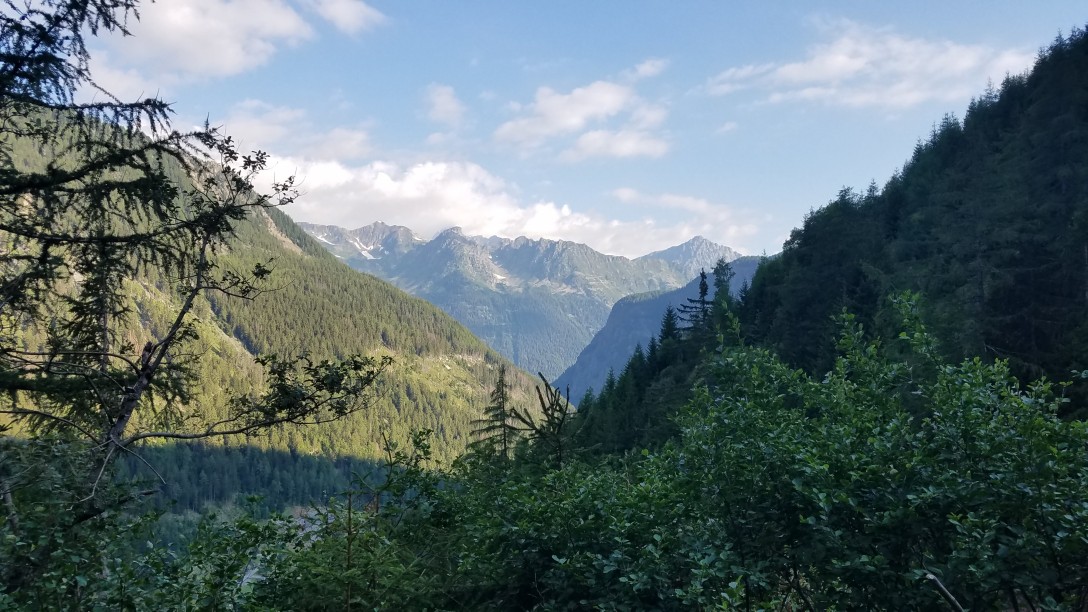 From there, we climbed and climbed to get to Refuge les Grands (2113m/6931′), which included a steep section with a drop-off and a cable mounted into the rock to help you stabilize yourself. 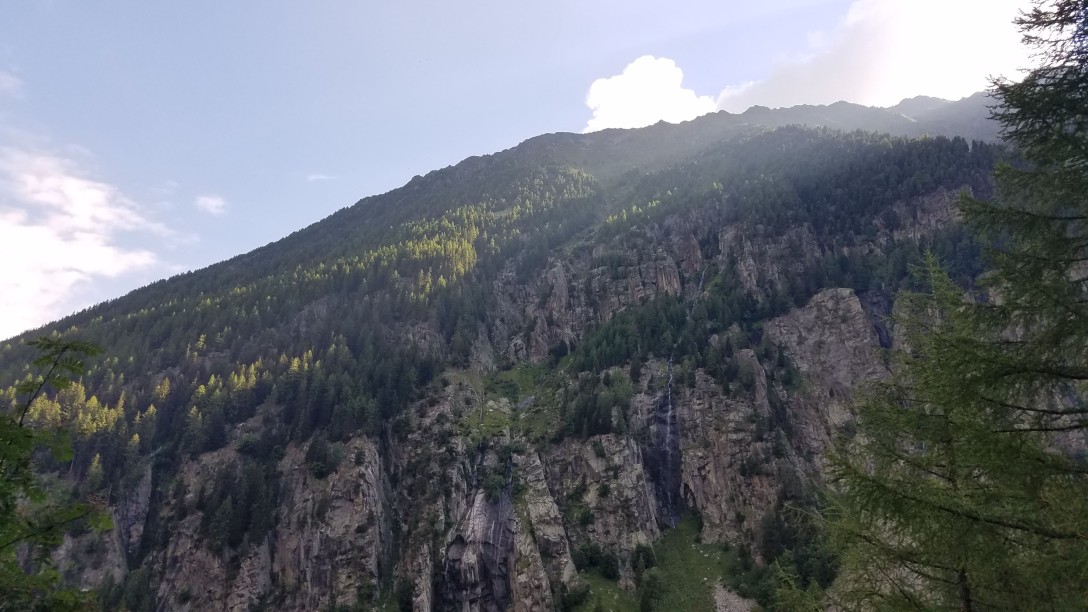 We filled up on water, used their privy, said hi to the Australian ladies as they had just arrived at the refuge, and then headed back out. 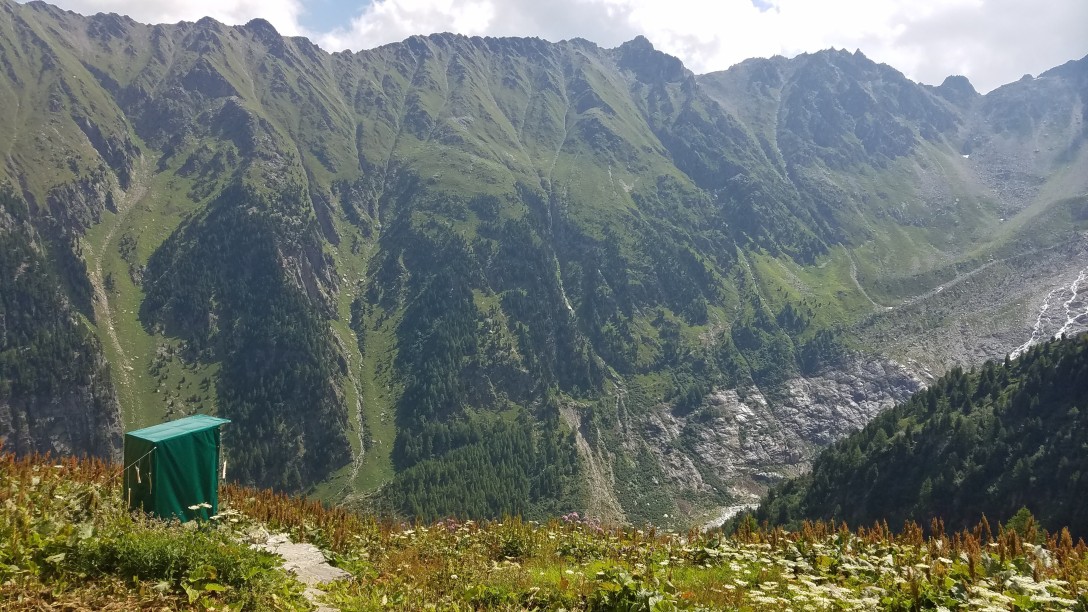 The trail became intensely technical, and undulated around the edge of the mountain range for a few miles before we even could see Col de Balme. 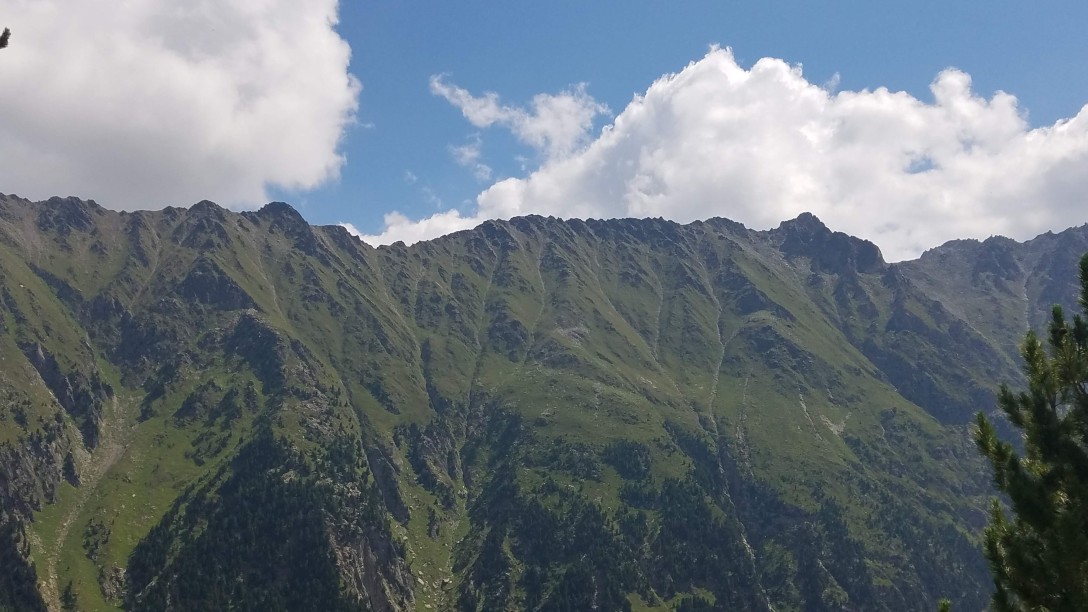 It took us a few hours to go from the refuge to the col, and we had to climb up and over some very steep, slippery snow fields. I barely managed to get across them without falling, and Toby slipped and fell down the snow field into the rocks below (perhaps 20-30 feet). He was scrapped up and bruised, but was thankfully in one piece. The two Australian ladies that we met the very first day were coming by at the same time and made sure he was okay.

Upon our arrival at Col de Balme (2191m/7186′), we were frustrated to find that the refuge only offered drinks, candy bars, and chips, and claimed to have no bathroom. And they said that they weren’t sure if their water was safe to drink. I told them I had water treatment and to just give me tap water anyway. Toby and I had sodas and chatted with the ladies for a bit. 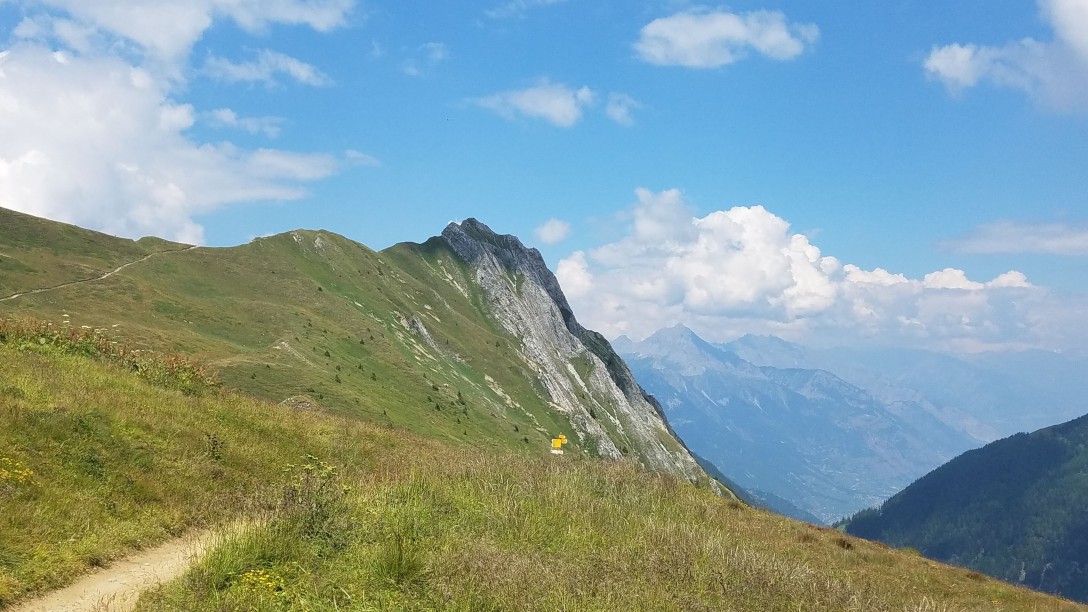 From there, we descended to the Col des Posettes (1997m/6550′) and made a detour to a small restaurant there to use their bathroom and buy an ice cream so we could use the customers-only bathroom. We then had trouble finding the correct path, as there were many different routes. We followed a single track towards the top, and around the peak of the ski lift, the road met up with the TMB, which had gone around a slightly different way. We then summitted the L’Aiguillette des Posettes (2201m/7219′). It rained off and on during our ascent and then stopped, though we could see more storm clouds in the distance.

The descent towards Tre-le-Champ was arduous and technical. The terrain was reminiscent of New Hampshire and Maine and didn’t make for fast going. We then took a side trail to walk into Montroc to go to the Gite le Moulin. The afternoon thunderstorm rolled in and we got rained on for the last half an hour of our walk. We arrived just in time for dinner at 7pm, and were welcomed by Michael at the front door. Thankfully, this is a small hostel and they’re not full tonight, so there’s extra room to go around. We’re in a 6- person room with just us and Michael.