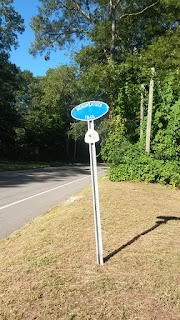 Thursday, September 1, 2016
I left work and drove down to Renee’s Way in Madison; there is a parking area there with access to the Rockland Preserve, which has connecting trails to the Mattabesett Trail. A few weeks ago, I submitted a request to the Madison Park and Rec department for a tent platform reservation on Rockland Preserve. If you don’t get a reservation, you don’t have permission to park overnight in the lot and can be towed.
Upon my arrival, I realized I did not know exactly where the tent platforms were. Unfortunately, there was no signage within the Preserve to indicate location, nor was it noted on their map. I ended up doing a 20 minute loop, half in the Preserve and half on the Mattabesett, and found a tenting area sign directly on the Mattabesett. There was a map posted on the Mattabesett that showed the general location of the tenting site. For reference, the tent platforms are off of the Red trail, behind the big rock, off to your left, between the main body of the Preserve and the Mattabesett. It is also on the Mattabesett, after the Lone Pine Trail split and before the additional connector.
After I found the tent platforms and privy, I set up my tent and settled in for the night. I was glad I’d brought extra water as there was no water source nearby. Based on maps, it appears there would be water available from Coan Pond, further into the Preserve.
Friday, September 2, 2016
Start: Rockland Preserve, Madison, Mattabesett Trail
End: Chittenden Park, Guilford, Menunkatuck Trail
Mileage: 16.7 (+0.8 for side trail to town green)
I was up at 6am, packed up by 6:30am. I decided to head back to my car at Renee’s Way, since it was a 5 minute walk. I left most of my backpacking gear in my car and packed up a day pack. I was on trail by 6:50am. I hiked approximately a mile of the Mattabesett before the branch off of the Menunkatuck Trail began. From there, I walked. 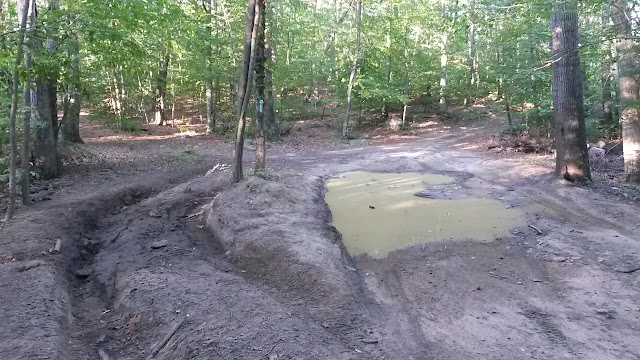 Near the beginning of the trail, it crosses through a number of areas used for off-roading; it seemed to be things like Jeeps rather than ATVs. I’d heard gunshots earlier the night before and I walked by the entrance to the Guilford Sportsmen’s Association a mile or so into the hike. As do many local trails, this one crosses through a portion of Cockaponset State Forest and then along into the Timberland Preserve. After a time, the trail brought me through many open fields by the East River Preserve; I saw people out walking their dogs.
The trail walks by what I presume to be the East River; it was excessively muddy and brackish. Around here, I also started seeing… snake worms. They’re worms that actively crawl over ground, looking rather like snakes. I’ve seen these in the woods where I grew up, on the shoreline in CT. 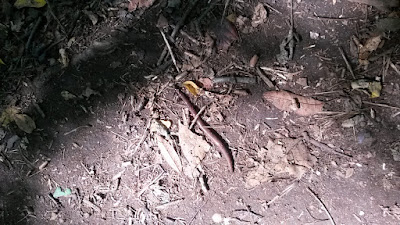 After traveling through a few more fields and a very brief climb up to a lookout, the trail emerged onto Clapboard Hill Road, across from the Guilford Riding School. From there, it was entirely road walking.
The walk meandered along Tanner Marsh Rd, Boston Rd, Lovers Ln, Stone House Ln, across the grounds of the Henry Whitfield Museum, down Old Whitfield St, across the train tracks using the pedestrian bridge,down Seaside Ave, and finishing by Field Rd with a brief boardwalk out to the beach and Long Island Sound.

Along the way, I walked by what appeared to be a space-age condominium complex.

It was a good idea for me to bring double the amount of water I usually would require. I encountered a very stagnant pond (with things enthusiastically growing on the surface), a brackish river, and saw one pond with decent water, though it was a few tenths of a mile off trail. Thankfully, the last ~3 miles were all road walking and I stopped at a gas station for drinks.

All said and done, the hike was quick and easy. I started on trail at 6:50am and could have arrived at Field Rd by 1pm. Since my taxi was set for 3:30pm and couldn’t come any earlier, I went to the town green, had lunch, and read for a while before heading to Chittenden Park. 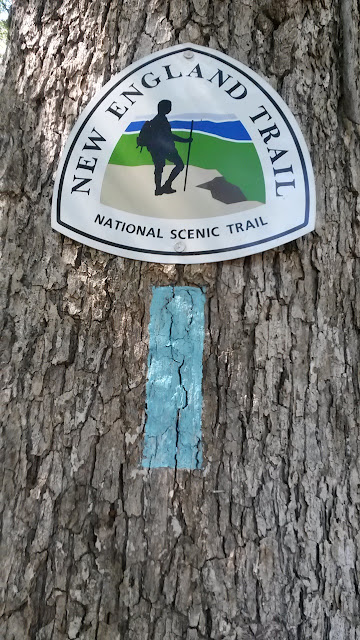