Skip to content
Sunday, March 12th, 2018
New England Hundred Highest climbed: Mendon Peak
Miles: ~10 miles (total, out and back hike)
Elevation gained:~1830′
MapMyRun recording (partial)
For this hike, I arrived at the trailhead on Wheelerville Rd in Mendon, VT around 1:15pm and was on trail by 1:30pm. I’d thought this was going to be an easier hike than it was. I’d seen estimates of ~7.5 miles for a there and back hike; my mileage ended up being ~10 miles and I didn’t add much for the path that I chose. 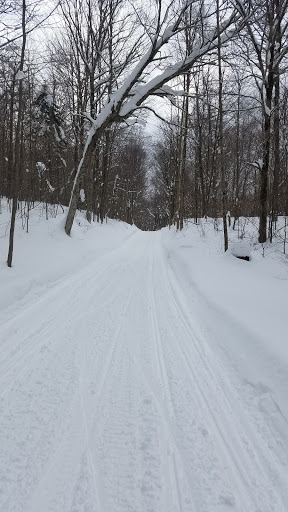 To start, I followed the x-country ski/snowmobile path. The parking lot for the trailhead was full, but I didn’t run into snowmobiles until the very end of my hike. The first half mile on this path was very quick moving. Everything was solidly packed down. Then the snowmobile path turned to the right and I continued straight, where there were only cross country ski tracks. 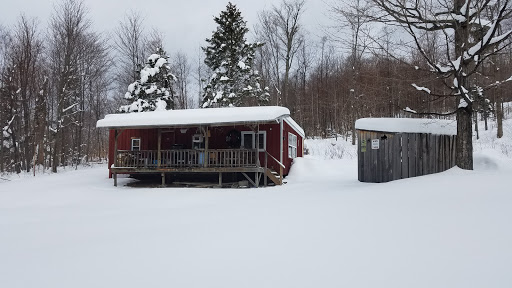 I passed by a cabin and not long after, came to an intersection in the trail. I was trying to follow a GPS track of someone who had done this previously, so I strapped on my snowshoes and took the left hand path going uphill, where no one had packed down the snow. This left me breaking trail for around a mile in snow up to my knees. Eventually, the unbroken path went back down and rejoined the ski track. I swore to never leave a beaten path again; I broke that vow about a mile later when I needed to head uphill towards Mendon rather than continue on the ski track coming from Killington. 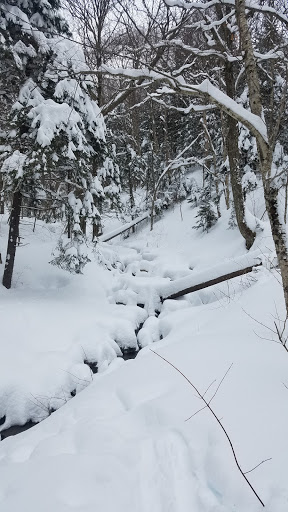 I passed by two backcountry skiers just as I crossed the creek for the umpteenth time and started to climb out of the valley. They assumed I was heading to Killington and told me there was no way I’d make it back before sundown on snowshoes. I headed uphill on a 45% grade, and broke away from the ski track as I came within a mile of Mendon peak.

I bushwhacked my way uphill, through knee- to hip- deep snow, with no discernible path of least resistance. The trees were incredibly dense, particularly towards the peak. As I tried to follow the GPS track to get to the peak, I had no option other than pushing my way through groves of evergreens, getting soaking wet and covered in snow. I fell into some hidden dead tree wells in snow up to my armpits and had to backstroke and flail my way out. At this point, I was getting very worried about making it back to my car by dark, my phone’s dropping battery (my GPS), and was very wet and cold. The degree of tree density at the top of the mountain coupled with hip deep snow everywhere made it impossible to find the tree with the canister on it, and I was totally fine with that. Based on my GPS estimates, I was within 500 feet of the canister and I think that’s close enough! It wasn’t from lack of trying, that’s for sure. 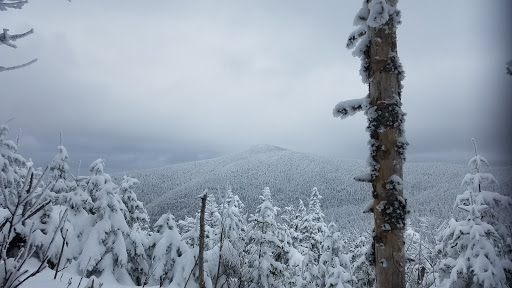 At the peak, I put on my dry layers in my pack and started to head back. I decided to follow my footprints, as it wasn’t worth finding a slightly shorter path when I’d have to pack down fresh snow. I ate a number of snacks and hoofed it for my car. I was very glad to get back on the ski track, and decided to follow it the entire way back. It was relatively flat and easy going, and for anyone trying this hike in the future, I’d advise you to follow the creek most of the way up to the base of the peak. 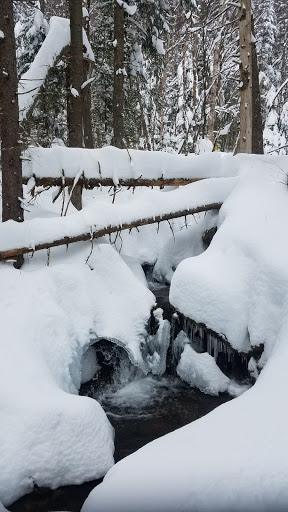 I arrived back at my car around 6:30pm, right after jumping into a snow drift to avoid a group of snowmobiles tearing through. I was very glad to be back at my car; my asthma was acting up and I desperately needed somewhere warm to breath and take my inhaler. I stopped to get hot tea and snacks, and blasted the heat as high as it went for my entire 2.5 hour drive home.