After work yesterday, I packed up and drove to upperstate NY, stopping at a Hannaford’s for groceries on the way. I arrived at the campground around 7:45.

The check-in booth was closed when I went through and there was no way to drop off my pre-registration. When I left this morning, the booth was still closed. When I returned today, the booth was yet again closed. In my entire time here, I have yet to actually see a campground attendant, though the bathrooms and showers are clean, so I guess it works for me.

I set up my tent, and then started to work on making myself dinner. I decided to do an easy dinner, because the idea of starting up my stove made me feel tired. I made a quick fire, roasted some hot dogs, and ate baked beans out of a can (and ended up with the only baked beans available in a pop-top can, because I forgot a can opener…). It was the correct decision. The smoke helped reduce, though not eliminate, the bugs, and it started gently raining within 30 minutes of me finishing setting up my tent. I ended up finishing my dinner sitting in the car, as it was dry and bug-free. I got to bed around 9:30, and then watched an episode of Special on my tablet before going to bed.

I slept fairly well but woke up with the morning light at 5:30am. I got up, quickly put on hiking clothes, and headed out within 15 minutes. I arrived at the trailhead around 6:15, took a quick bathroom break, and then headed down the trail by 6:30. There were already ~4 cars in the lot when I arrived, and 3-4 new cars arrived while I was prepping, though they appeared to be heading out to do trail work.

It had been raining all night, and continued to rain off and on (sometimes torrentially) until 1pm, when the sun started to peak through. By 3pm, it was blue skies and sunny.

The first 2-3 miles was road walking on a gated gravel road. This was a nice way to start, getting some solid miles in before the right turn into the woods on an actual trail for the first few miles. The blue-disked trail was fairly smooth; though muddy and wet in many places, I was able to make ~3 MPH through this section (which passed by the herdpath for Santanoni, where I’d be coming back), until I arrived at the intersection with the herdpath to Panther/Couchsachraga. I took the left and headed up towards Panther. The going was fairly smooth, following a rocky stream bed for a good portion of the climb; nothing was too steep and I managed the climb up to the intersection for Panther’s side trail well. I then took the spur trail out to Panther, took a picture of the socked-in summit (after needing to pull down the chin strap on my hat to keep it from blowing away), and then headed back towards the intersection again. On my way back, I snagged my knee on a pokey branch, and bled down my leg for a bit until my body managed to clot through the leg sweat and rain dripping down my legs. 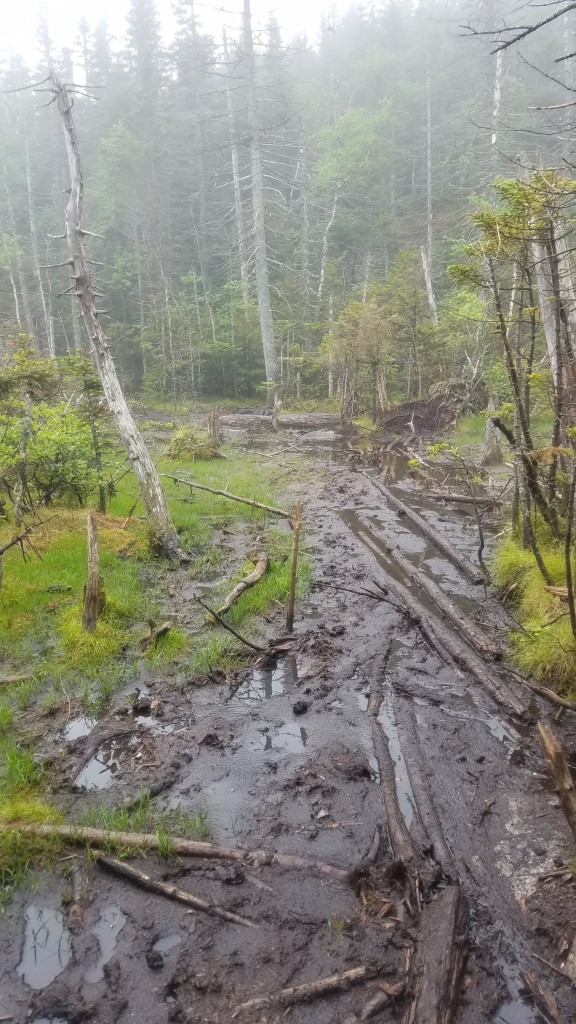 I passed straight along, descending to a muddy, muddy col before climbing again to get to Couchsachraga. On my way back from that peak, I saw my first other hiker; his dog was on a prong collar and looked completely cowed and cringing. I felt really bad for him. I then climbed back to towards the height of land before the spur to Panther. On the way, I passed by 4 people heading towards Couchsachraga. I then took the right, to descent towards Santanoni.

The going over to Santanoni wasn’t too bad, though as I was climbing up towards the summit, the skies opened in a spectacular way, and I was completely and utterly drenched to the skin, despite wearing a heavy duty rain jacket. It was one of those days where everything (except what was stored at the middle of my pack) was wet. It was wet enough I had trouble using my phone because it was too wet to detect my fingers and instead detected all of the pine needles and water on it as input… It wasn’t very helpful. I passed by another 8 people around the summit of Santanoni or on my way back down the herdpath towards the actual trail. The downhill section was fairly steep and had some very steep rock face sections where friction climbing was needed, but everything was wet, making it a bit treacherous. As things smoothed out, I was able to make better time, though I still had a few near misses with wiping out in the slick mud. One particular embankment had me slide 3 feet down and splash into a mud puddle with both my feet together, resulting in mud up to my knees. 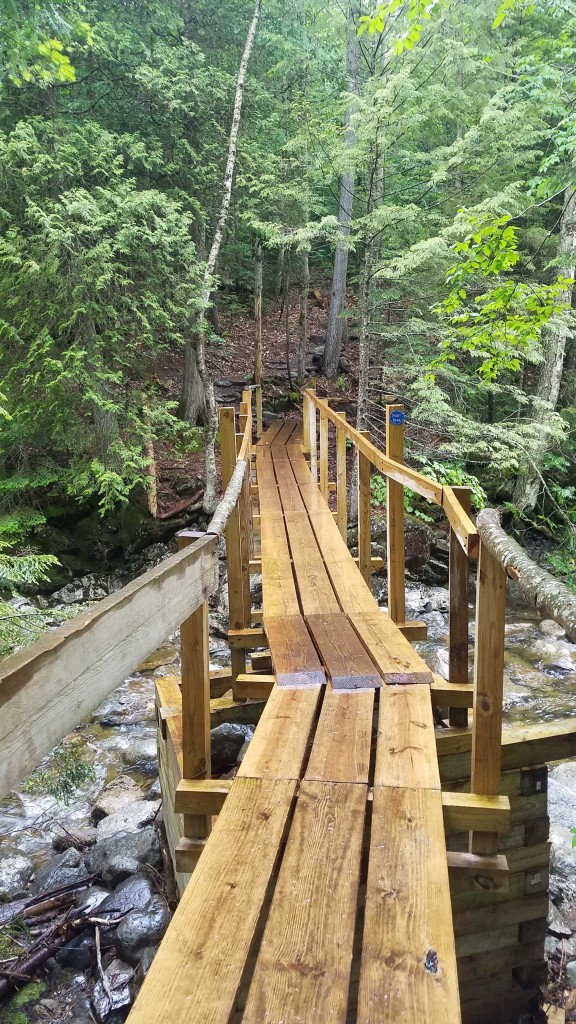 I was glad to finally arrive back at the intersection with the actual trail, and start to make 3 MPH pacing. It was a bit more than an hour out to my car from there, taking it at a good pace. The mosquitoes tend to encourage a fellow to walk faster than they might otherwise. Those bloodsuckers got a fair size donation from me today; likewise, my LL Bean backpack doesn’t handle the wet very well, and it managed to rub me raw in a few different places, including some new ones.

I was glad to see my car, and promptly tried to dry out my various devices, as they were so wet they wouldn’t charge. My phone recovered well, but my iPhone that I use as an iPod has not fared very well. It started turning itself off; it started the day with 88% battery but within a few hours, turned itself off stating it was out of battery. I’m not sure what the problem is, but this iPhone 4s is decidedly less hardy than my last iPhone 4, which dealt with being damp like a champ.

After grabbing my snacks and drinks from the back, I started back towards the Lake Harris campground. On the way, I stopped at the town of Newcomb’s public picnic area, as it was in full sun, breezy, with beautiful views of the mountains.

I used it as an opportunity to dry out all of my gear, knowing it wouldn’t dry very well by the lake in the partial shade. So I hung out there for maybe 45 minutes, before heading down the road to the Two Scoops ice cream shop. I had the ‘dirt and worms’ sundae, and then got a malted chocolate shake to go. While at the ice cream shop, I occasionally was part of a local family’s conversation, asking about the weather and recommending cute animal Instagrams. It turns out, Verizon is the lord of cell service out here; they all had service while I have only had service at the top of the mountains. I also was lucky enough to spy a tiny under-3-inches-tall hummingbird on the feeder!

I then returned to my campsite, where I had a nice roaring fire to keep the bugs more at bay and made my mac and cheese, kale, and hot dog dinner. I cleaned up, packing up everything I can, and then had a lovely shower. I’ll be going to bed soon, with the plan to be up early around 5:30 to pack up and be on my way to hike Allen.